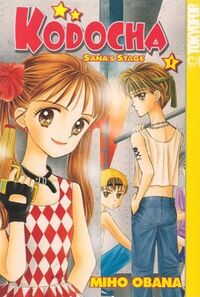 Kodomo no Omocha (こどものおもちゃ, lit. "Child's Toy"), commonly shortened to Kodocha, is a manga series written and illustrated by Miho Obana. The manga was serialized in the magazine, Ribon from April 1995 to January 1999. Shueisha published the manga into ten volumes. Tokyopop published it before their defunct in 2011.

In December 1995, an OVA based on the first few chapters of the manga was released. An hundred-and-two-episode anime aired from April 5, 1996 to March 27, 1998. A spin-off, Mizu no Yakata was published in 1999. In 2011, a cross-over story titled Deep Clear introduces Sana and Akito again.

The story centers around Sana Kurata, a child-actress, who meets Akito Hayama, a troubled delinquent. Kodocha has a wide range of characters. Some characters are also anime exclusive. Read more...

All pages can be edited and you are welcome to join us and contribute to this wiki. Everyone is free to create a new page or edit an existing one. If you have any questions about the wiki or helping out, you can ask one of Kodocha Wiki's administrators.

Fuka Matsui (松井風花 Matsui Fūka)is one of Sana Kurata's many friends. She was also in a relationship with Akito Hayama for a brief period of time. Fuka is from Osaka and can sometimes be teased because of her accent.

Want to affiliate with us?
If you would like to become an affiliated site, please contact an administrator.

Retrieved from "https://kodocha.fandom.com/wiki/Kodocha_Wiki?oldid=5613"
Community content is available under CC-BY-SA unless otherwise noted.